After landing fifth and fourth, respectively, last season, the De La Salle University Green and Lady Fencers ended their UAAP Season 80 campaign on a high note, both finishing at third place on Sunday at the Philippine Sports Complex Fencing Hall.

Although there were certain lapses, the team battled hard en route to a podium finish. “May mga kailangan pa kaming ipolish na mga moves and techniques na galing sa coaches namin. We need to listen more and learn more from our coaches this next season,” Lumahan added, setting his eyes for next season as early as now.

The Green Fencers received a total of four bronzes. Both Lumahan and Vincent Tibus finished at the third spot in the Individual Sabre category. Cho Won Suk, Joshua Lee together with Lumahan and Tibus landed at third in the Men’s Sabre Team. Hadj Santinitigan, Keith Medina Tyrone Nieto, and Maurice Uy similarly ended at third in the Men’s Epee Team.

The Taft-based squad vowed to strive even further for next season. “Expect a better team but a smaller one because we have the skills. We just need enhancement and improvement,” she added.

La Salle mentor Gian Nocom was impressed following the feats achieved by his squad. “Very impressive. Most of our fencers got a medal, and that is a big plus for us.”

But he insisted the fencing team still has a lot to improve. “Mas maganda kung ma-improve pa namin yung team. Maintain or up; there is no way we should go down.” 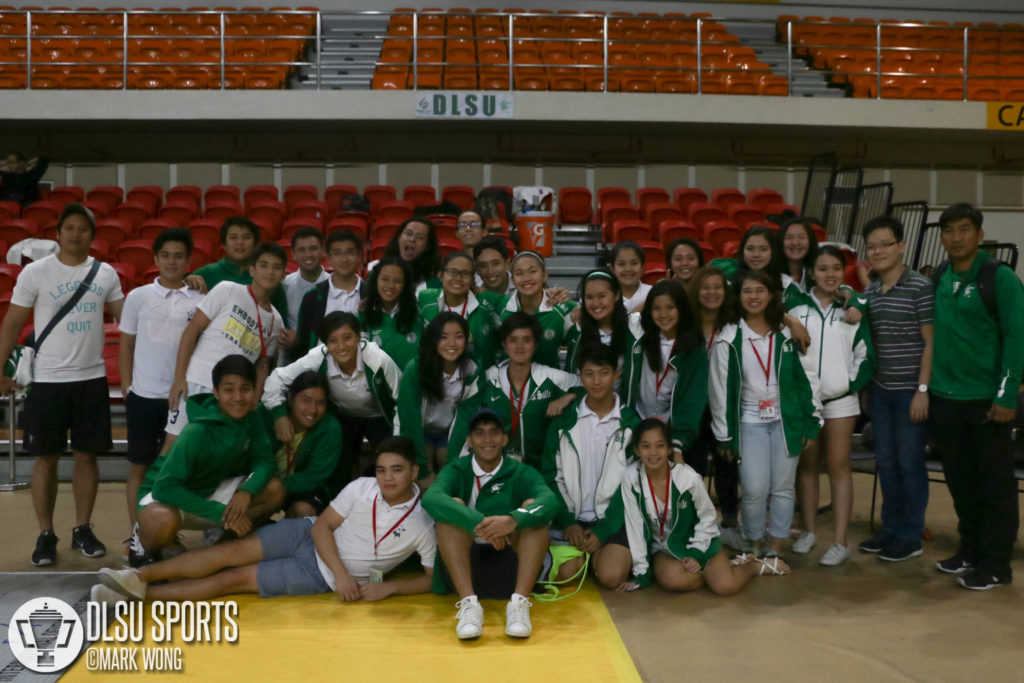 The De La Salle University Green and Lady Fencers came to a bitter end at the UAAP 79 Fencing tournament after failing to keep their podium finish-promise last February 8-11 at the UST Quadri-Centennial Pavillon.

“Wala kaming players for [some] weapons so most of us played weapons na not originally nilalaro namin. That explains the shortage of our performance,” expressed Lady Fencers team captain May Montenegro. Although the teams were with a depleted lineup, the Taft-based squad still pushed through and fought until the end. “Talagang inayos namin kung sino yung ila-lineup namin, kahit papaano [naman] nakakuha kami ng medals,” added the graduating Montenegro.

Two bronzes were in the hands of the Green Fencers at the end of the tournament. Matthew Ignacio landed on the podium in the Sabre category while Green Fencers Ignacio, Jay Añonuevo, Tyrone Nieto and David Lumahan also finished third in the Men’s Sabre team event category.

The women’s team dropped to a fourth place finish after getting to the podium last year. Lady Fencer Divine Romero pulled the Green and White team up after clinching two bronzes in the Epee and Foil categories. Meanwhile, Romero, Montenegro, Chloe Rudio and Patricia Eusebio finished second place and claimed silver in the Foil team event category.

“We wanted to make a difference and give glory to La Salle and ourselves,” shared men’s team captain Jay Añonuevo. Although the team was not able to live up to their expectations, he was nothing but hopeful after the team’s performance this year, “We kept fighting and did our best and that’s what matters.” He also vowed for the Green and Lady Fencers to strike a massive comeback next season and try to improve their standings. “We’ll be better next year,” he ended.

The Green and Lady Fencers’ season might have been over but the fight still continues for the team. Expect a better fencing lineup for the Taft-based squad next year. 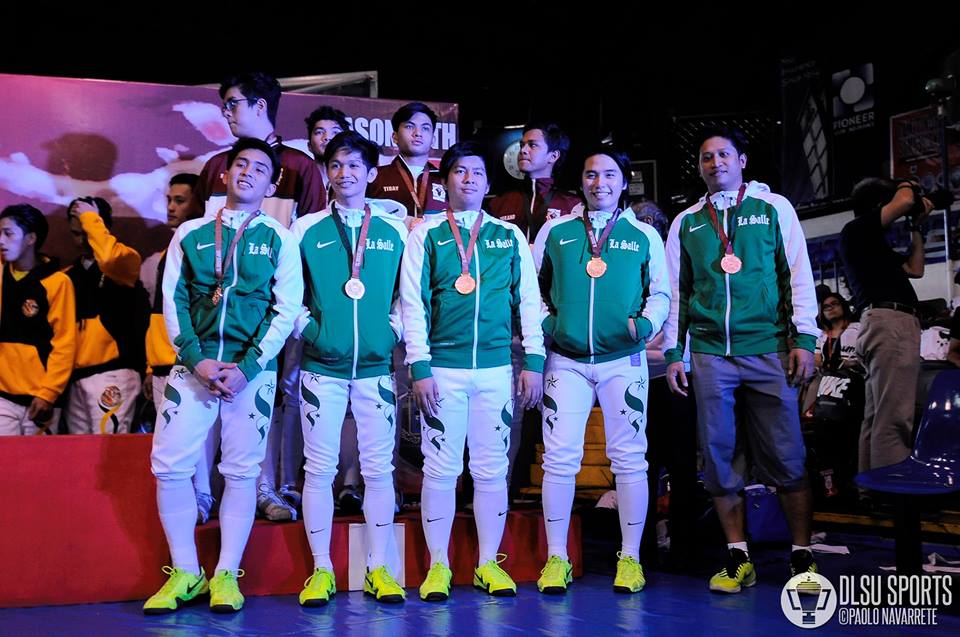 With both teams closing out last year’s competition ranking fourth, The De La Salle University Lady Fencers finished this season climbing to third place, while the Green Fencers settled for fifth at the end of a four-day titanic collision in the UAAP Season 78 Fencing Tournament held at the Blue Eagle Gym, last February 10-13.

Green Fencers Team Captain Raymund Orozco got it going early in the tournament and helped set the pace for La Salle, hooking the bronze medal in the Men’s Epee event. While rookie Francois Licono, a prized-recruit from the University of the East, also bagged bronze in the Men’s Sabre competition.

Meanwhile, rookie Lady Fencer Divine Romero posted a silver medal finish after yielding to Justine Tinio of UE in the finals of the Foil event for the women’s team.

In day two, Licono carried momentum as he continued tallying medals for DLSU. He closed out the Men’s Foil with another bronze medal. The Lady Fencers, on the other hand, were handicapped as Team Captain May Montenegro did not play in any of the individual events for the Taft-based squad in the first two days. However,  they were able to snatch two bronze medals as well in the Women’s Epee and Sabre events respectively coming from rookies Romero and Kharyl Shoemaker. 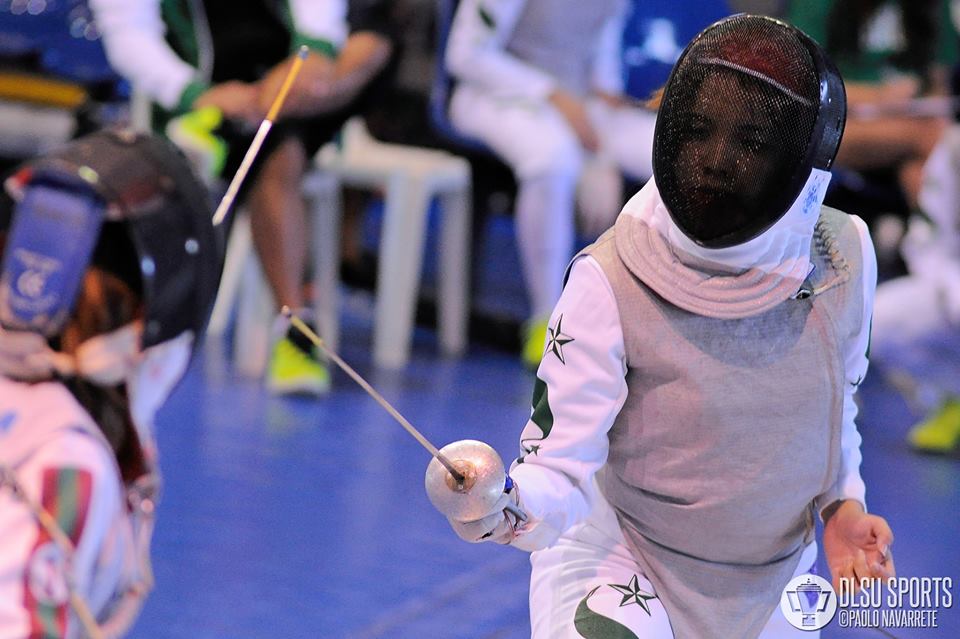 The Green and Lady Fencers sustained success in day three as both teams garnered bronze medals in the Men’s Epee and Women’s Foil team events respectively. Orozco, Licono, Jose Anonuevo, and national team player Gian Rodriguez failed to grab a medal in the Men’s Sabre Team competition as they finished last at sixth place, falling victims against the University of Santo Tomas, 45-34.

On the final day of the tournament, the Green and White made sure to close out the competition in victorious fashion. The Green Fencers scored a bronze medal in the Men’s Foil Team against Far Eastern University, 45-32, while, Romero, Montenegro, Mikaella Castilo, and Nichole Apacible stringed silver and bronze medal in the Women’s Epee and Sabre Team events separately. 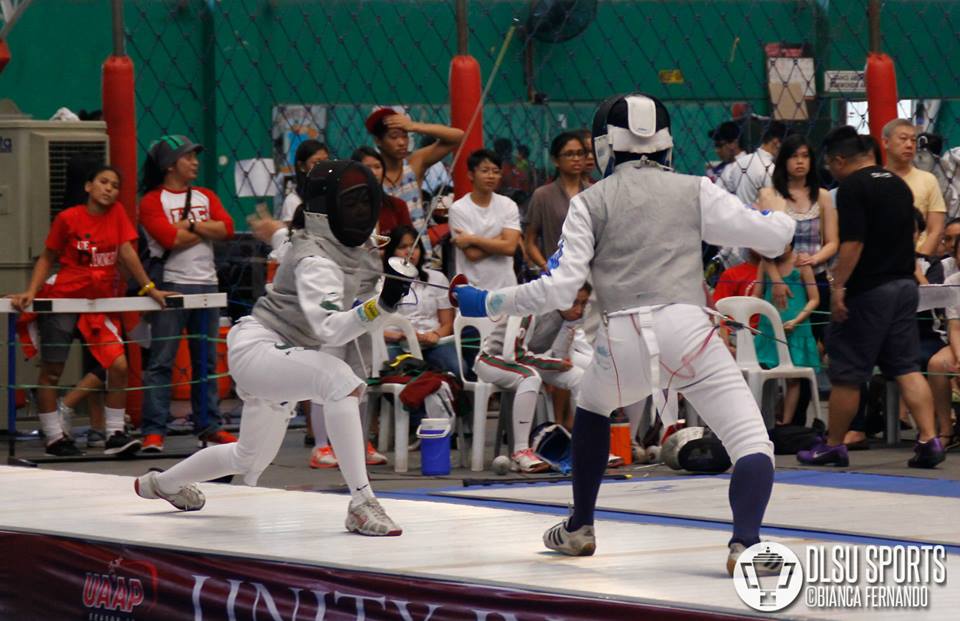 Returning to the piste yet again to battle for school pride, the DLSU Green and Lady Fencers once again took hold of it at the College of Human Kinetics Gym. With their passion and skills playing center stage, the Taft based squad took a home a total of three medals during the individual tournaments.

Exhibiting a dazzling display of lunges and lightning like riposte, the DLSU Green Fencers started off to a great start at the hands of team captain Raymund Orozco who displayed his dominance by breezing through his assignments in the elimination round with the sole exception of UE’s Lee Ergina to whom he lost 4-5. DLSU’s Gian Rodriguez, however, did not enjoy the same luck experienced by his team captain as he was only able to secure victories against UST and FEU and lost to UP, UE, and ADMU, 4-5 in each instance. His victories however seemed to enough to merit him an entrance to the quarterfinals along with his comrade in arms.

The La Salle side’s luck however seemed to have run out during the quarterfinals as Rodriguez soon falls to a UST’s resurgent Noelito Jose losing to a close 11-15 while Orozco suffers an injury which affected his ability in defending his hard fought gold from last year and simply settle with silver after losing 10-15 against the same person during the finals.

The string of bad luck however did not stop their as it extended to the afternoon with the failure of DLSU Lady Fencers team captain Bea Villaroman to qualify for the quarterfinals of the women’s foil category and her comrade, May Montenegro to fall during her quarterfinal match against UE regardless of their passion and determination to advance. Happening at the same time as the women’s foil, the DLSU Green Fencers’ run during the sabre category was also short lived as both Jairus Quevada and Jose Anonuevo fails to advance to the quarterfinals despite showing the same amount of mettle shown by their comrades. 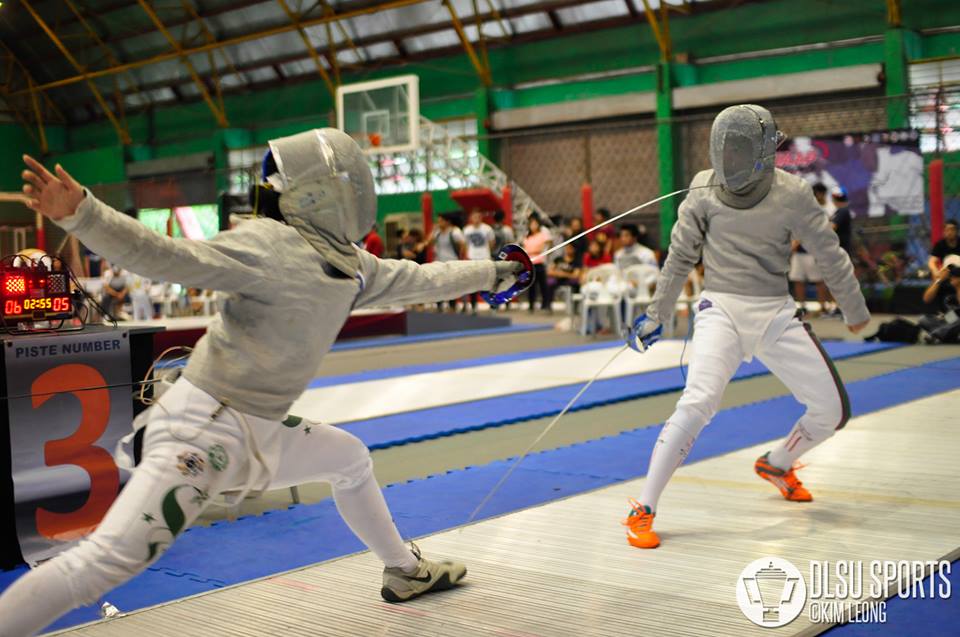 Suffering from their lackluster first day performance, the Lady Fencers were set to right their wrongs as May Montenegro once again takes to the piste along with comrade Mikaela Castillo to battle for the women’s epee. Fate, however, had different plans for May Montenegro as she was denied her chance at redemption as she failed to qualify for the quarterfinals while Castillo advanced all the way to the semis to bring home the bronze after suffering a loss from UE’s Keren Pangilinan 9-15.

Creeping up all the to the afternoon’s women’s sabre category , fate once again played a horrible game on our Lady Fencers as both Jianne Piguing and May Montenegro again went through something similar to their run in the foil category the day before as Montenegro once again fails to keep the momentum and lose during her quarterfinals match against UST’s Kimberley Camalan 6-15 while Piguing, similar to the team captain Villaroman, fails to qualify for the quarterfinals.

While denied her (DLSU’s Montenegro) retribution after three attempts, DLSU’s Gian Rodriguez successfully claims a bronze medal during the men’s foil after failing to defeat UE’s Nathaniel Perez during the semis. Rodriguez’s comrade, Hermino Bacino III, on the other hand failed to qualify after falling to ADMU’s Derich Cabrera in a close 13-15 match.

While failing to reach hit their target, DLSU sabre Coach Gian Nocom shares that he is still somewhat satisfied with the performance of the fencers. Citing the need for luck, he shares that this year simply held too much surprises as he shares the unexpected FEU-UP match up in the sabre finals. He further shares that with the performance of UST and the outcome of their matches, the best thay can do right now in terms of the General Championship race is to simply lessen the point GC point UST is poised to receive or to simply nullify the points that is to be gained by DLSU’s GC rival.