Filled with optimism, the Green and Lady Tankers plunged into the waters of Rizal Memorial Swimming Stadium last Thursday, October 2, for the UAAP Season 77 Swimming Tournament. Three days after, the Tankers occupied the middle third of the six-university pile alongside UST.

La Salle’s women’s team scored a podium finish at third with 121 points while the 159-point haul of the Green Tankers earned them fourth place.

The green-and-white teams slipped behind fellow aquatic powerhouses Ateneo and UP in Day One. As a result, La Salle’s contingent was locked in a thrilling duel with UST’s Tigersharks for third in both men’s and women’s swimming events.

The women’s team also had trouble keeping pace with swimmers from other schools but displayed flashes of brilliance in some events which saw them take a third place finish anew, just behind champions Ateneo and runners-up UP. Sabrina Ilustre bagged the sole gold medal for DLSU in the women’s 200 meter breaststroke. A silver and two bronze medals were also collected by the team in a division virtually dominated by blue and maroon.

Captains Kito Zialcita and Raissa Teaño were pleased with the tournament’s outcome after both teams faced a rebuilding process this year with their seasoned veterans already gone. Although falling a notch behind expectations, the Green Tankers did Zialcita proud after a competitive performance against the competition’s top dogs. “It did not go as predicted but my goal for my team was just to give it our all and compete with the best.” He also sees a bright future for the team that he has now forsaken after playing his last UAAP tournament. “I see [swimmers from] our lower batches are really strong. As long as they continue to train, they are going to improve. Sooner or later, [they will] get the championship.”

Teaño echoed the sentiments of her counterpart. “I really feel that everyone have given their best this season. I can already see how dedicated my teammates are to be in this team.” She also pointed out the necessary adjustments they had to make under new coach Evan Grabador. While it was not a process that can always be completed within a short span of time, Teaño shared that they took it positively. After yet another third place finish, the Lady Tankers, at best, did not slide down the rankings.

Swimming for La Salle for the last time, the captains are thankful for an amazing journey with the team. Zialcita is beaming with pride knowing that his team delivered an entertaining performance in this season’s tournament. Teaño, meanwhile, is happy for all the time she spent with the team-her second family that inspired her to become the person that she has turned into. 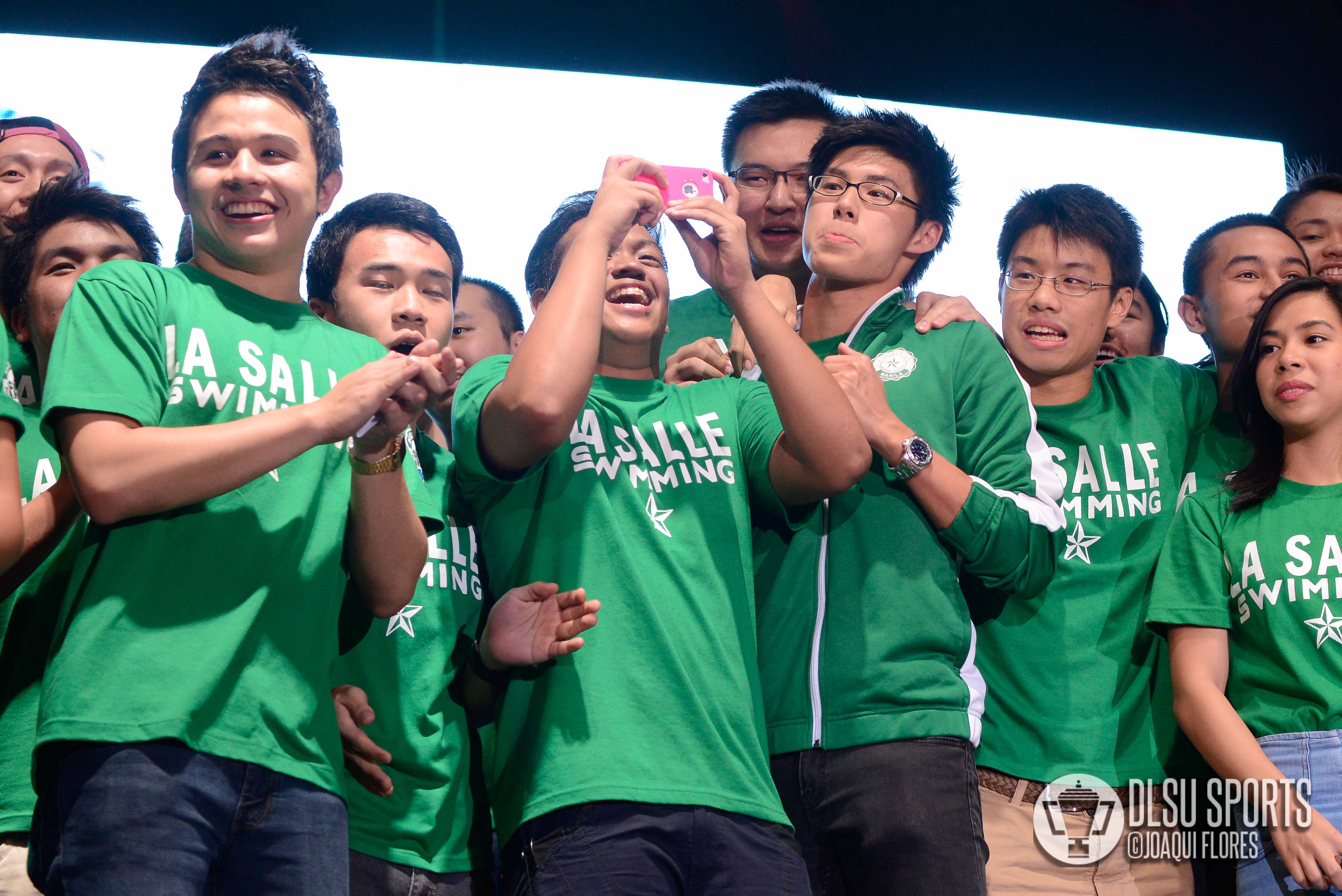 Allotting almost a full year in preparation for this annual tournament, they are looking to do generate bigger waves at the Rizal Memorial Swimming Pool from October 2 to 5. They even maximized the summer break by training twice a day to assure that everyone will be in their best form come the season.

Losing a bunch of experienced swimmers, both team captains Kito Zialcita and Raissa Teaño expressed that the current roster’s members went beyond their usual laps in order to prepare themselves in overcoming the challenges they will be facing this season. “The veterans planted their seeds already in our team, and it’s just our job to continue what they have started,” told Zialcita. Teaño also added, “We felt that each swimmer now has a bigger role to play in the team.”

The Lady Tankers will be without Lorraine Angkico and Hannah Cheng while the Green Tankers will miss the services of Johansen Aguilar, Ron Tan, Allan San Juan, Jason Gaviola, Eugene Lin, and  Benjamin Cruz.

Always finishing within the top three in recent years, the teams know that they have what it takes to not only stay there as championships have been always the goal every time a green-capped swimmer plunges into the pool.

To take them there, unity and commitment is what Teaño thinks will aid the team’s journey to a sea of gold medals. “We want it more this year. The Tankers are hungry for a championship.” As for Zialcita, he is looking forward for the teams to benefit from the massive support that they are bound to receive from the Lasallian community. “Family, friends and fellow athletes will be able to watch and cheer for us all the way. This will be a huge push for our team,” he said after the UAAP decided to hold the event in the Rizal Memorial Swimming Pool in Manila, which is geographically closer to the UAAP member schools than the Trace Aquatics Center in Los Baños, Laguna.

Each team is always eyeing to win the championship. What also motivates the DLSU Tankers on their way to the competition apart from the glory are their desire to continue improving together and the objective of getting the most out of every opportunity. “We like to think of ourselves as more than just teammates. We’re a family. We support each other no matter what and we accept each one despite weaknesses or differences,” Teaño disclosed. In support, Zialcita also shared that they will do their best “to put up a good competition against the other schools.”

The teams look to solidify their grip on the breaststroke, sprint, and relay events. At the same time, the Tankers will also hope to make their presence felt in the other categories to strengthen the championship hunt.

As the last sporting event of UAAP Season 77’s first semester, the swimming meet will be a pivotal piece towards La Salle’s general championship. The Tankers are aware of the task at hand. Towards fulfilling that goal, the swimmers will be delighted to be inspired by fellow Lasallians en route to achieving their goals this season, a twin championship included. 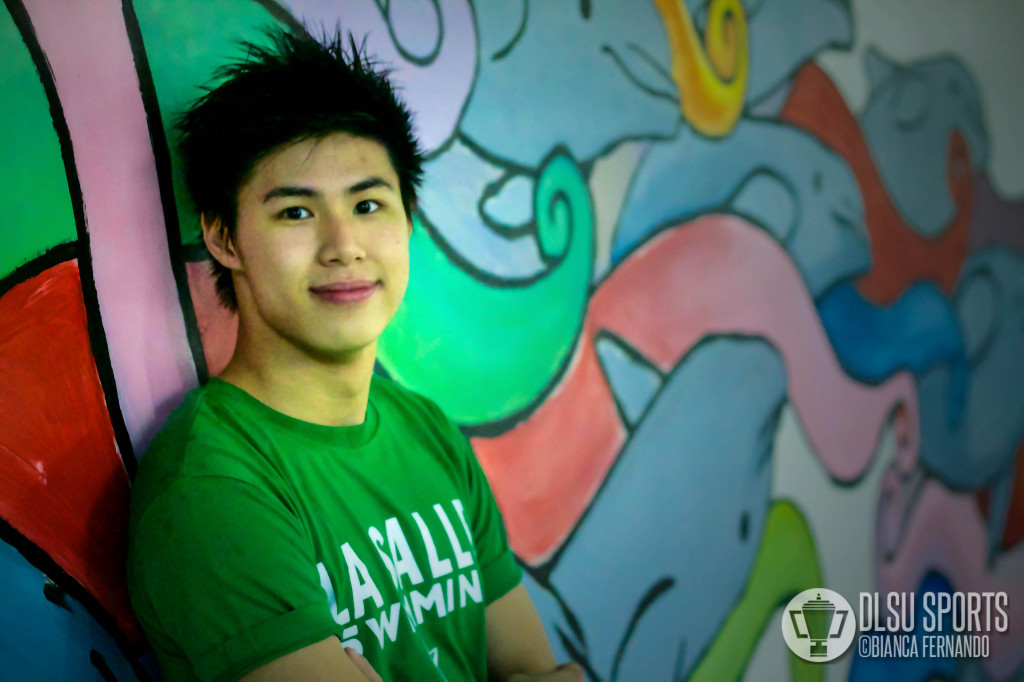 For quite some time, majority of the University Athletic Association of the Philippines (UAAP) fan base were focused on the men’s basketball and women’s volleyball tournaments due to their tremendous fluctuations in terms of their popularity.

With much of the spotlight focused in savvy hoops and power spikes, the UAAP fan base haven’t seen the other talented athletes on a regular basis since they aren’t given much exposure by the media.

One of those athletes is former Green Tanker Johansen Aguilar.

In a nutshell, Aguilar is considered as one of the premier swimmers in La Salle sports history given his impressive resume of bagging 2 championships and 2 runners-up finishes in his 5 years of playing in the UAAP. In addition, La Salle’s ace swimmer even made bigger waves after he bagged three Most Valuable Player (MVP) plums during his career.

Aguilar got his first crack in swimming when he was seven years old.  A year after learning the fundamentals of it, he was already involved in a series of swimming competitions. Given his continuous exposure, Aguilar got his chance to represent the country by being part of the Philippine Swimming team even though he was still only at 11 years old.

As he grew older and with him already preparing for his tertiary education, his budding reputation in the swimming community eventually made him one of the most sought athletes in the biggest collegiate leagues in the country

After hearing all of the recruitment pitches from a lot of collegiate teams, Aguilar decided to enroll at De La Salle University  (DLSU) wherein he decided to pursue the Bachelor of Science in Applied Economics and BS in Applied Corporate Management  degree program.

Moreover, he expressed the importance of time management and personal discipline in balancing his academic and athletic priorities which made him become one of the top student-athletes in the DLSU system. 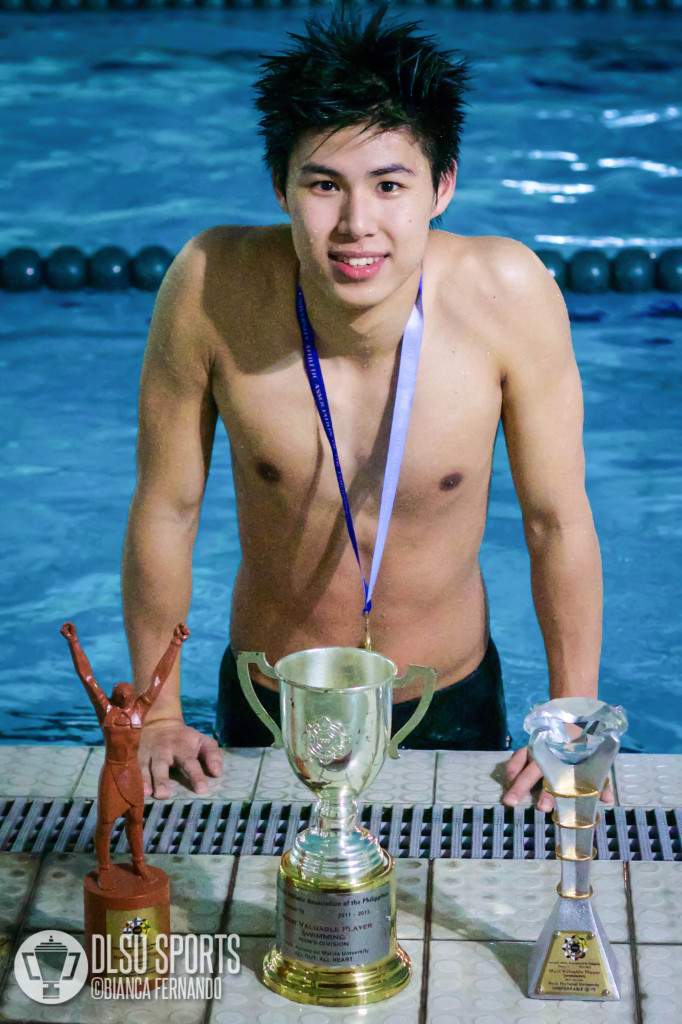 Throughout his stay in DLSU, Aguilar has been performing at peak levels not only in the waters but also in his efforts to be efficient in his academic life. Consistently part of the Dean’s List, Aguilar has successfully carved his reputation of being an outstanding student-athlete.

Aguilar defines his first year of playing for the Green Tankers as the zenith of his UAAP career. Wit him experiencing difficulties in adjusting to the team’s ideologies, he immediately struck gold after capturing his maiden championship

Also during in his rookie season, Aguilar had the golden opportunity to be teammates with La Salle swimming legend Enchong Dee, who then played his last year in the UAAP. Dee’s depature prove to be the passing of the torch to Aguilar lead the Green Tankers for the upcoming seasons.

However, Aguilar noted that his sophomore campaign was the lowest point of his career due to number issues, and most of all, their failure to defend the title.

Despite the setback he personally had in that season, he used it to bounce back and had it as an inspiration towards maximizing his UAAP eligibility years. 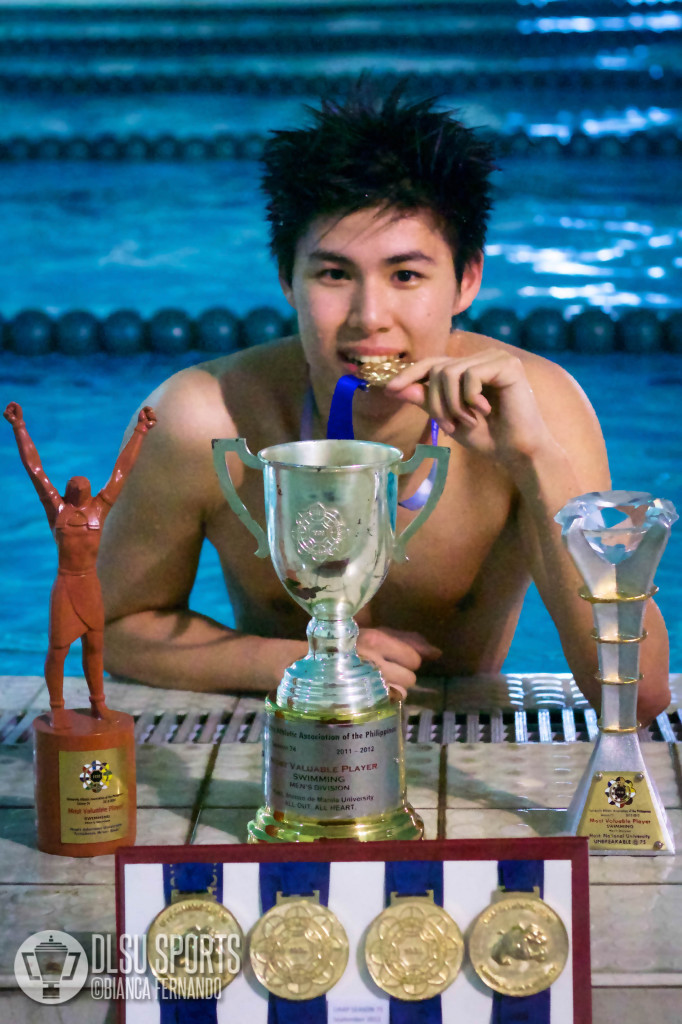 He ended up grabbing three straight MVP awards during UAAP Season 74 to 76 year and he was also named  UAAP Athlete of the Year  during Season 74.

Just like other UAAP athletes that have graduated, Aguilar plans to continue with his studies in the University. Currently, he will be enrolling in graduate school to further expand his knowledge. Furthermore, he is open to other opportunities that may come to his career.

Leaving the squad he has played for five memorable years, he wishes the Green Tankers squad to continue as one of premier championship contenders in the UAAP.

“Basta focus lang sa training and never stop. Dapat may balance din sila sa acads and give it their all pag may competitions,” he happily concluded.

The DLSU Green and Lady Tankers ended their UAAP Season 76 stint in respectable finishes as the Men’s team grabbed bridesmaid finish while the Women’s team landed at 2nd runners up.

Despite the dominance of UP making waves this season, the Green-and-White tankers were able to maintain the feat as one of the best to compete in the swimming tournaments. For the men’s division, the Green Tankers accumulated 301 points, far behind UP’s 452. The Men’s team were also able to edge past Season 75 champs, Ateneo with their 283 markers.

A lot of the accomplishments of the Men’s team were garnered by their graduating senior, Johansen Aguilar, who was also named as this year’s tournament Most Valuable Player. Aguilar joined seven individual events in the competition and was able to bag an impressive 5-gold, and 2-silver to cap of his astounding UAAP career as a Green Tanker. He placed 1st in the 200m butterfly, 100m and 200m backstroke, and 200m and 400m individual medley race. He bagged his two silver medals in the 100m butterfly and 50m breaststroke contest. To put an amazing remembrance to his career, he piled up breaking records to surpass previous times in the two medleys he joined.

In addition, Johnmar Gonzales and Jerrald Beltran helped the Men’s squad in their own individual matches. Gonzales earned Gold in his 200m breaststroke, and got two silvers in his 50m and 100m breaststroke race. Beltran chipped in a silver medal in the 50m butterfly competition.

The Lady Tankers, on the other hand, finished their campaign placing third with 115 points although far behind from the top two finishers, UP and Ateneo, which had 587 and 387 points respectively.

Sabrina Ilustre shined in her individual matches finishing all her six events with bronze medals in the 100m and 200m breaststroke and butterfly, and 200m and 400m individual medley.