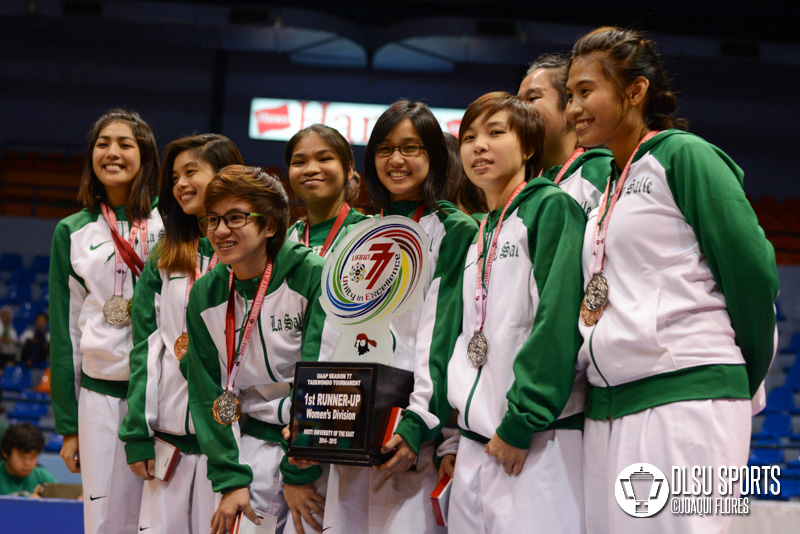 “Podium finish”, this is what DLSU Taekwondo Assistant Coach Alberto Morfe was heard hoping for both the DLSU Green and Lady Jins after witnessing one of many controversial calls that finally ended La Salle’s dominance of the UAAP Taekwondo tournament. Sadly, however, it seemed that the heavens once again had different plans as the Green Jins were denied the podium finish they were hoping for as they slipped to fourth while the Lady Jins were once again able to enter the top three spot by climbing to second place at the end of the UAAP Taekwondo tournament last September 16.

Although failing in their quest for a repeat championship, the DLSU Green Jins proved that they are still a team worthy being watched. Exhibiting an unyielding mettle in the face of numerous controversial calls that cost them their tragic defeat, the Green Jins fought bravely regardless of the outcome.

The team’s first assignment for the day was none other than UST who comfortably sat in first place with an undefeated record. The DLSU Jins were pushed to their limits as they gave their all to try and knock the league leader of its perch, sadly however, that was not the case as certain crucial matches, specifically Kyle Uy’s and Gerry del Rosario’s matches were lost due to strikes that failed to merit an approved point of contention from Head Coach Roberto Cruz and Assistant Coach Morfe. The UST crowd’s celebration was, however silenced in one final act of redemption by none other then DLSU’s Kris Uy who fought which such ferocity that his opponent had nothing else to do but endure repeated blows to the head to end the DLSU-UST match with a loss.

The match against third place UE was a similar story as it too was filled with numerous erroneous calls and fouls specifically the uncalled hits to the shin of Gerry del Rosario who bravely continued to finish his match albeit being barely capable of walking. The loss against UE resulted in the Green Jins crashing all the way to 4th behind NU who we tied against, but ultimately lost to due to the win over the other rule of the Tournament.   Regardless of the loss, however, many of the Green Jins finished with a medal for their performances. Kirk Barbosa, Kevin Sia, Jay Licayan, Pogs Jazmines, and Gerry del Rosario who all took home a bronze, Kris Uy bagged silver and Season 75 Rookie of the Year Benjamin Sembrano captured the team’s only gold.

While more fortunate than their men’s counterpart, the Lady Jins did go through some rough waves as well as they were able to improve their fourth place standing from last year to a second place finish this year.

Contrary to the difficulty faced by the Green Jins in their match against UE, the Lady Jins proved to have been more than what the UE Lady Jins bargained for as they drove full speed ahead to finish their match at a 6-1 win leaving UE winless this year.

The match against league leader UP , however, was a complete opposite of their earlier match as the DLSU Lady Jins suffered a hard 5-2 defeat against the UP Lady Jins to land fourth. That placing, however, did not last long as FEU’s win over UST placed them along with DLSU in a triple way tie wherein the Lady Jins won over the other two by more number of individual matches won. The good news did not stop for the Lady Jins as they too took home numerous medals. Apriel Solimen, Paola Amon and Gabrielle Yuchingtat each brandished a bronze, Cleio Banez and Farah Regis were awarded bronze and Camille Bonje certainly has a season to remember with a gold along with the Rookie of the Year award under her belt.

With the end of the UAAP Taekwondo tournament comes the beginning of the UAAP Poomsae  Tournament to be held tomorrow at the San Juan Arena. Poised to break UST’s dominance in the newly created event, Coach Jean Pierre Sabido shares that he is more than confident that the DLSU’s poomsae squad will deny the Thomasians of the sweep they pulled off last year as he expects at least two gold from the possible five gold medals up for grabs.  While acknowledging than not all the UAAP universities acknowledge the importance of the poomsae tournament, only  DLSU, UST , UP, and FEU currently have poomsae coaches, they  are more than ready for any surprises any other teams might pull off.

Photos can be viewed by clicking the link below: