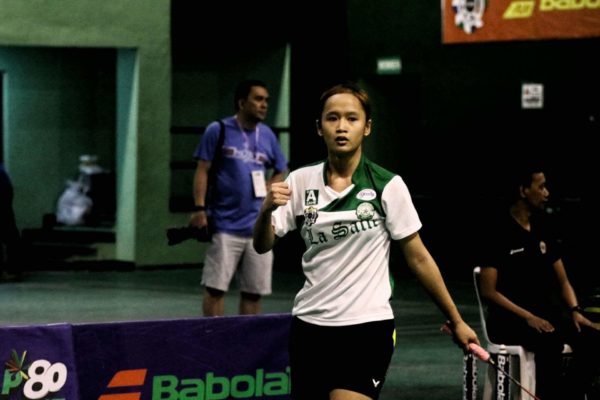 The DLSU Lady Shuttlers finally knocked out their Ateneo counterparts in five thrilling matches, 3-2, in the Final Four of the UAAP Season 80 Women’s Badminton Tournament at the Rizal Memorial Badminton Courts, Saturday.

After bowing out for two straight years even with the twice-to-beat advantage against the Lady Eagles, La Salle changed the outcome this season and broke the ADMU curse.

It was a rough start as Sevilla lost two quick sets, 12-21 and 10-2, to the then-undefeated Bianca Carlos. But as they say – START STRONG, FINISH STRONGER.

Arianne Rivera bounced back and got the first win for the Taft squad as she dispatched Ateneo’s captain, Cassie Lim in three frames, 21-14, 19-21, and 21-16.

The first doubles was a tussle between the pair of Isay Leonardo and the comebacking Nicole Albo against Geva de Vera and Trixie Malibiran. They quickly finished the match to put La Salle one win away from clinching a spot in the finals, 21-13, 21-16.

The pressure-packed second doubles was a tough match for La Salle as the duo of Sevilla and Tercias bowed to their Atenean counterparts, 9-21, 21-18, and 21-12.

With the score knotted at 2-all, the comebacking Nicole Albo made quick work of Atenean senior Trixie Malibiran to book a seat for La Salle in the finals, 21-12, 21-13.

It was the first time in three years that La Salle was able to find the solution to the Lady Eagle’s dominance over them in the final four phase of the tournament. Coach Owen was pleased that finally, his team was able to get over the final four nightmare that was Ateneo. He added that it was a coincidence that during the previous seasons, they were defeated on his birthday. But this year, the lost fell on Ateneo coach Kennie Asuncion’s birthday.

Catch the Lady Shuttlers battle against the UP Lady Maroons in the Finals tomorrow, 1PM, still at the Rizal Memorial Badminton Courts.