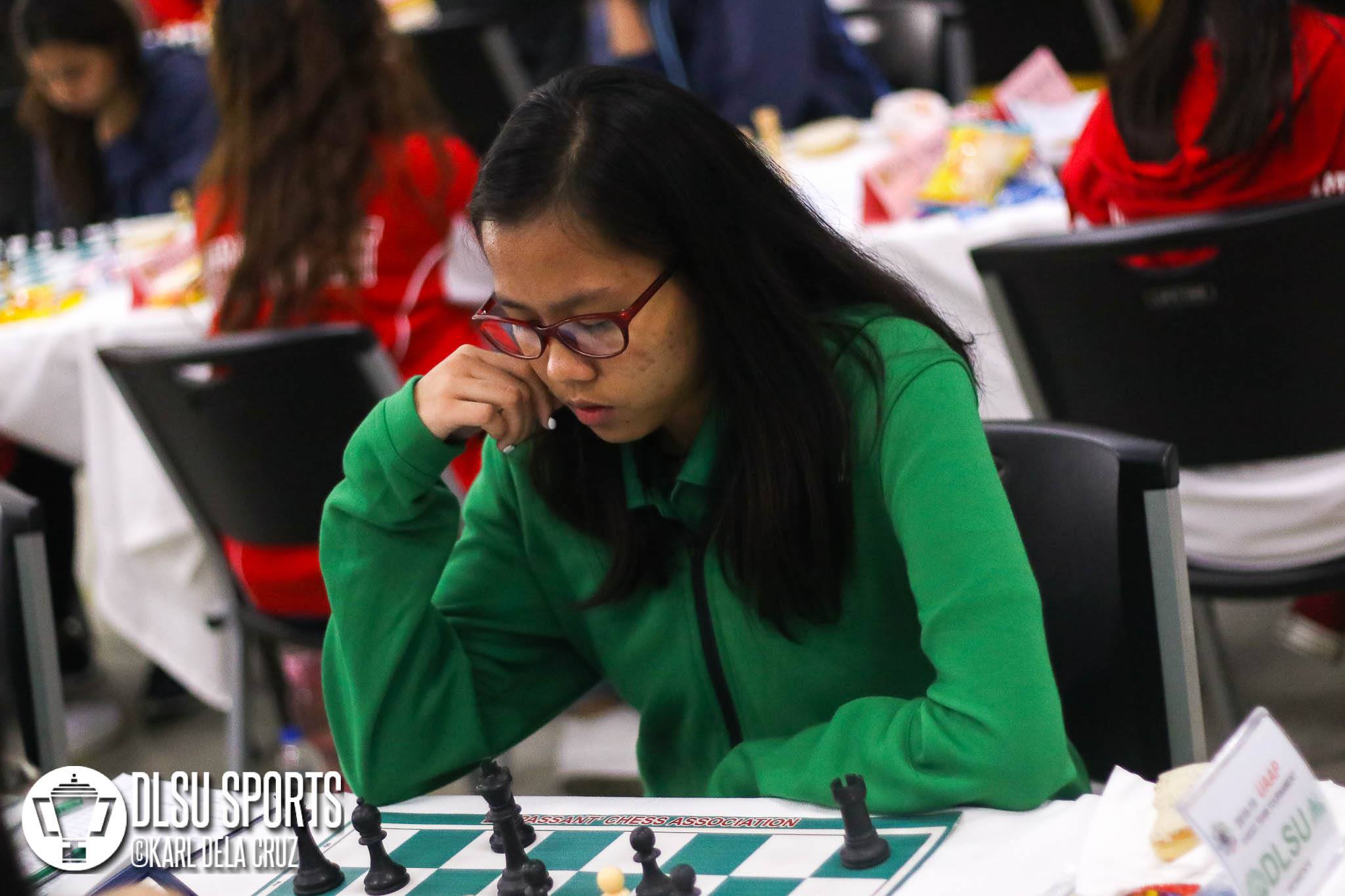 The De La Salle University Woodpushers were able to capitalize this weekend, winning all of their matches last Saturday, February 24 and Sunday, February 25 at the University of Santo Tomas Quadricentennial Pavilion.

On the first day of the games, the Lady Woodpushers set the tone for the rest to follow. The team of Bernadette Galas, Mira Mirano, Marie San Diego, and Kyla Camacho of the green side won all of their matches to sweep rivals Ateneo, 4.0-0.0.

For the men’s team, Giovanni Mejia, Christian Nanola, and Denzel Amar all won their respective games to triumph over Adamson, 3.0-1.0.

La Salle then carried on their momentum towards the second day of the matches.

Again, Galas, Mirano, and San Diego all notched wins, while Moulic had a deadlock with her opponent as the Lady Woodpushers ended their weekend with another win, 3.5-0.5 over University of the East.

The Green Woodpushers then capped off their weekend with a 3.0-1.0 win over Ateneo, as Mejia, Nanola, and Surposa all picked up wins.

The Woodpushers will look to build off their excellent start to Season 80 so far in their next slew of matches. Animo!

The De La Salle University Woodpushers opened their Season 80 with a solid weekend, as both the men’s and women’s team notched wins ovber their opponents at the University of Santo Tomas Quadricentennial Pavilion last weekend, February 17-18.

For Day 1 of the weekend chess games, the Green side got off to a blazing start, as both men’s and women’s teams bagged wins over their opponents.

Starting with the women’s division, the team of Bernadette Galas, Mira Mirano, Marie San Diego, and Ella Moulie of the Lady Woodpushers notched a 3.0-1.0 standing, winning 3 games and giving up just 1 to National University on Saturday.

The men’s team, likewise, picked up a victory to start the season. Against the University of Santo Tomas, the Green Woodpushers won 3 of their games and drew 1 to end the first day with a 3.5-0.5 standing, led by the foursome of Giovanni Mejia, Christian Nanola, Denzel Amar, and Jeazzir Surposa.

For their second foray of the weekend, La Salle garnered draws in both of their games last Sunday.

Taking on Far Eastern University, the Lady Woodpushers won 2 and lost 2 against the Morayta-based squad. As for the Green Woodpushers, they also recorded a 2.0-2.0 card against University of the Philippines’ chess team.

During the weekend, on February 6 and 7, the Green Woodpushers battled with wit and skill against the University of the East (UE), Far Eastern University (FEU), and Adamson University (AdU).

The atmosphere’s silence did not stop the ambiance of the match from excitement and intensity. On the first day of the eliminations, from 1:00- 5:00 in the afternoon at the 5th floor of Henry Sy building, a green-base court, both Taft- based teams earned their spots in victory against the University of the East. Adamson University also succumbed to DLSU during the second day of eliminations while the Far Eastern University beat DLSU’s Women’s Team.

The Green Team was on fire, crushing all opponents on their way to the top, refusing to give up the crown. DLSU’s Nanola, Amar, Oberio, and Meja defeated the Men’s team of UE with three wins- leaving the opponent with a single win, 3.0-1.0, during the first day of the tournament. Meanwhile on the second day, Adamson was scorched with three loses, departing DLSU with a score of 3.0-1.0.

Finishing with a score of 3.5-0.5, DLSU’s Mirano, Mejia, San Diego, and Galas fought to get back the champion’s title. The Women’s Team defeated UE during the first day of eliminations but lost during the second day against FEU with a score of 1.5-2.5.

De La Salle University then concludes the weekend with a standing of 2-0 and 1-1 for the Men’s and Women’s Team respectively. The Green Woodpushers will next face UST while the Lady Woodpushers will battle it out with Ateneo. The game will then be held February 8 at the same venue. 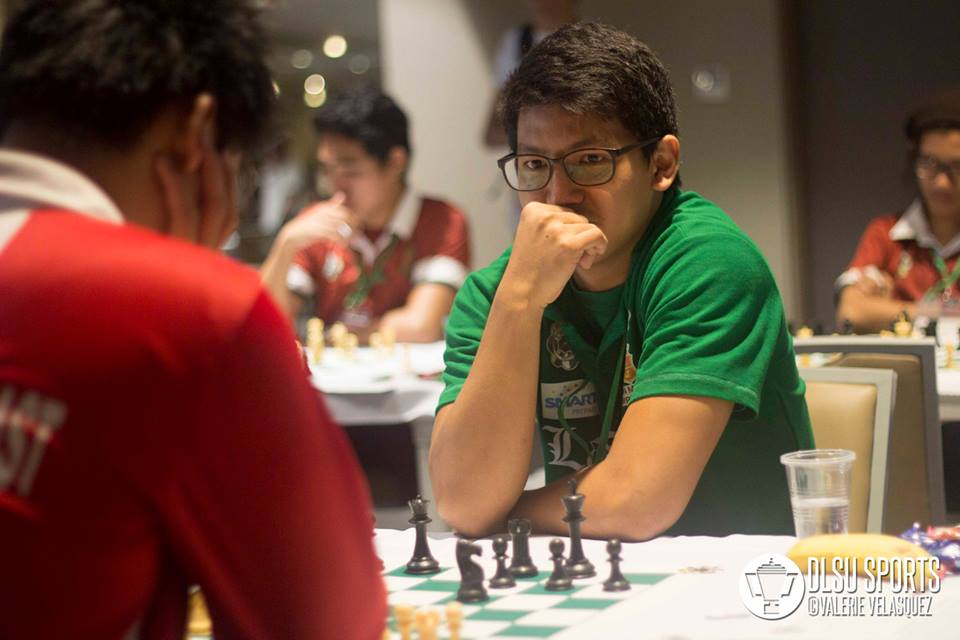 Being a sports writer ever since I set foot in college three years ago, I was initially tasked to cover and write for the DLSU Woodpushers. That was Season 74 back then. Ateneo de Manila University (AdMU) was the host school. Meanwhile, the Henry Sy building was not erected back then either. That year also marked DLSU’s Centennial Year.

Prior to this particular job when I was still writing for The LaSallian, the chess teams were not exposed to the Lasallian community despite consistent top performances over the last decade.

It has been three years of forming a special bond between the DLSU Woodpushers. I can still remember when they adopted me during my first UAAP chess coverage on our way home to Taft.

For the Lady Woodpushers, RP team member Aices Salvador was the face of the team. The reigning UAAP MVP Jodilyn Fronda was the much-anticipated rookie during that season. Present assistant coach Susan Neri was still on her last playing year for La Salle three years ago.

On the other hand, the Green Woodpushers was a team full of youth and promise through blue-chip rookies in the likes of present team captain Aglipay Oberio and Franz Grafil. Age did not really become an issue for them to have a tremendous season debut in the UAAP.

The DLSU Woodpushers three years ago was a mixture of youth and experience – a glimpse of the present and the future. Head coach Randy Segarra was instrumental in building a solid core which could make a run for multiple titles in the upcoming years. Likewise, his coaching staff also did a very good job in scouting for fresh talent across the country.

Despite the less exposure and credit for their outstanding play, the DLSU Woodpushers worked hard. They let their playing do the talking. They knew in themselves that respect is ought to be earned, and they have been willing to work hard for it.

Three years after, the DLSU Woodpushers are one of the few varsity teams DLSU is consistently banking on to snare the much-coveted UAAP General Championship (GC) plum.

A handful of players already exhausted their playing years in the UAAP, while one already become part of the coaching staff. The rookies before are the present team captains, while the present rookies are some of the best in the country. Time passed, yet the formula for the Woodpushers’ success still remains unchanged – consistency and hard work.

After 10 rounds this season, the Green Woodpushers, after years of finishing third or fourth over the years, are finally sitting atop the standings. On the other hand, the Lady Woodpushers are chasing history for a five-peat. They have two more rounds to reshape their fate and rewrite history, if ever they pull off a double championship.

I am glad that I have seen this team grow (together) over the years. It’s a beauty to see that respect is definitely earned, and credit is finally given due.

This job of mine will definitely end at some point in time, but I never regret anything from this experience. Watching these two teams play together as one cohesive unit will always be one of my best memories as a sports writer in college.