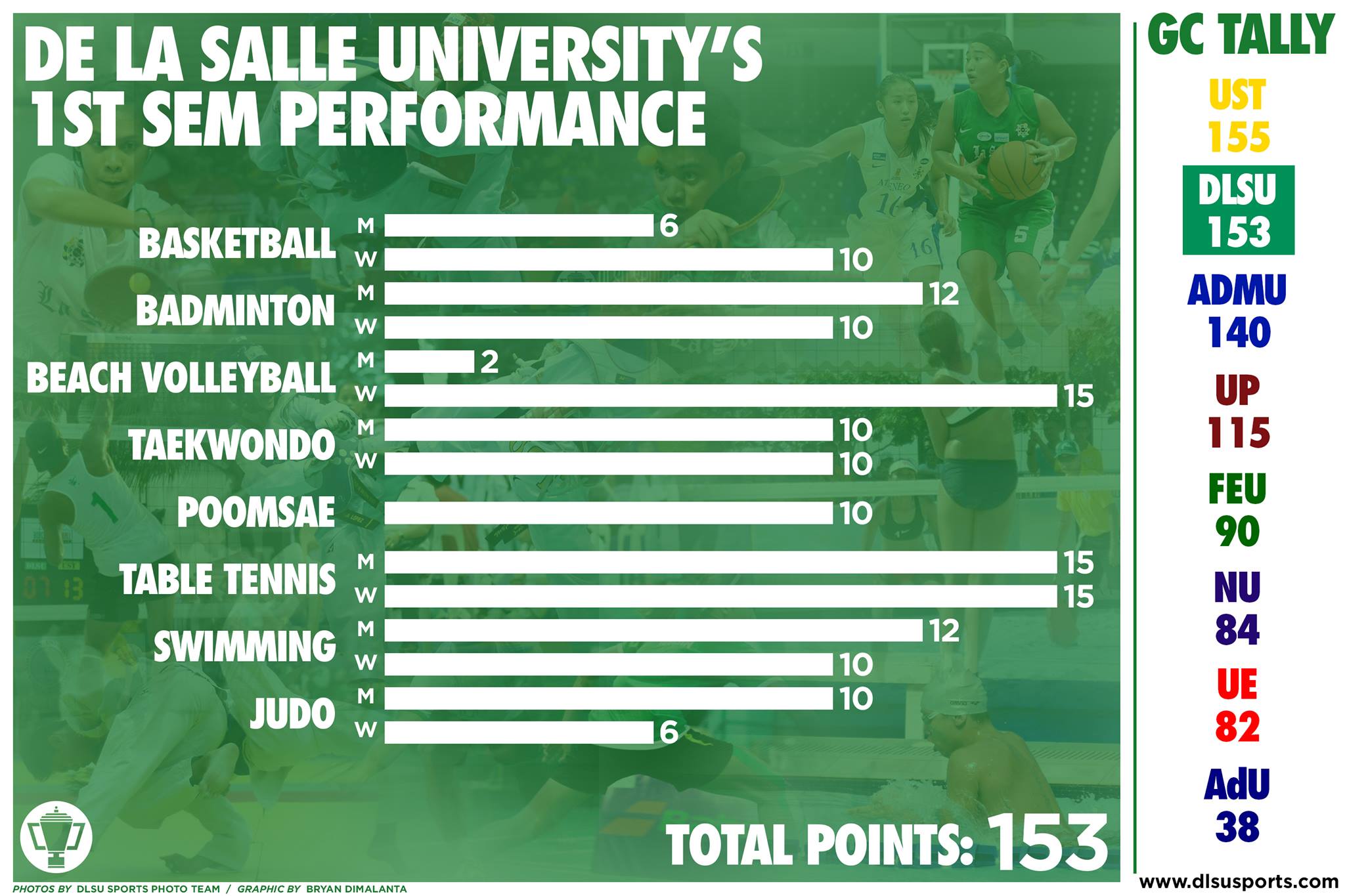 De La Salle University finished the first semester of the UAAP at second place in the rankings with a total of 153 points behind University of Santo Tomas, which garnered 155 points.

Here is a quick breakdown of DLSU’s performance for every event in the first half of the UAAP Season:

Twice-to-beat. Teams work hard in the elimination rounds to have this advantage come the Final Four. Twice-in-a-row. The Lady Archers failed to capitalize on that advantage and failed to make it to the Finals.

Who would have thought that it is possible for lightning to strike the same place twice? Last season’s shocking loss in the Final Four was once again experienced by the DLSU Lady Archers in another painful defeat, this time at the hands of rivals, Ateneo Lady Eagles. 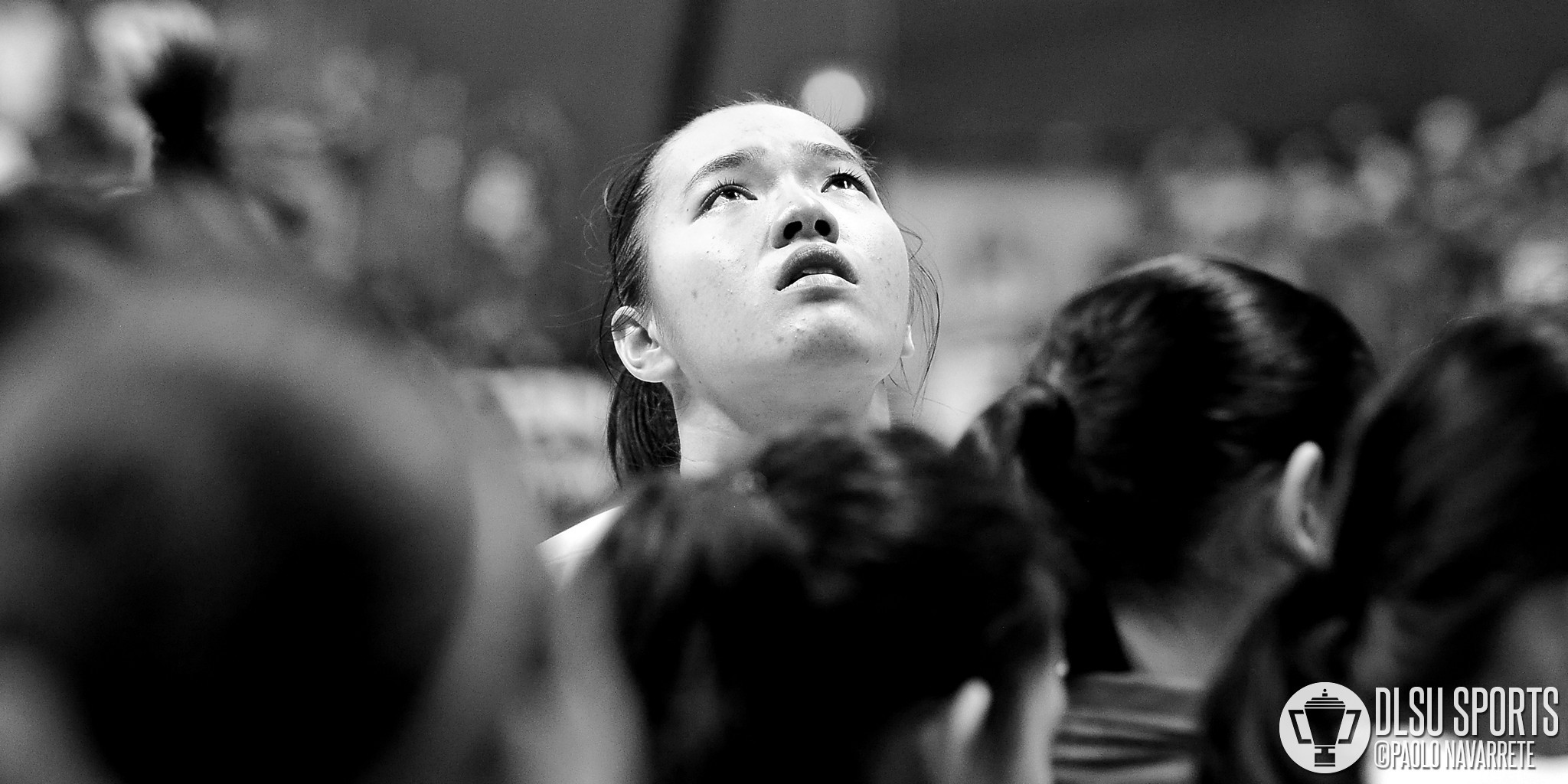 Finishing third, the Lady Archers earned a total of 10 points for DLSU. This Season also marked the end of the UAAP careers of Ria Pineda, team captain Alyanna Ong, and Ara Abaca, who is one of the most decorated (five individual awards) players to ever play for La Salle.

As for the men’s team, even after much talk during the offseason, losing big man Arnold Van Opstal, the ineligibility of prized recruit Ben Mbala, the injury of Joshua Torralba and starting guard Kib Montalbo, the Green Archers still entered the season with high hopes for another impressive run; they, however, encountered hurdles too high for them to handle throughout the Season.

DLSU finished the first round of eliminations at 2nd place with a 4-3 win-loss card, wins came in, including a huge victory against rivals, Ateneo Blue Eagles and the boys in Green and White looked like a team which could potentially make it all the way but the Green Archers ended up losing five of their last seven games and missed the Final Four by the skin of their teeth.

Rookie of the Year – Joshua Andrei A. Caracut 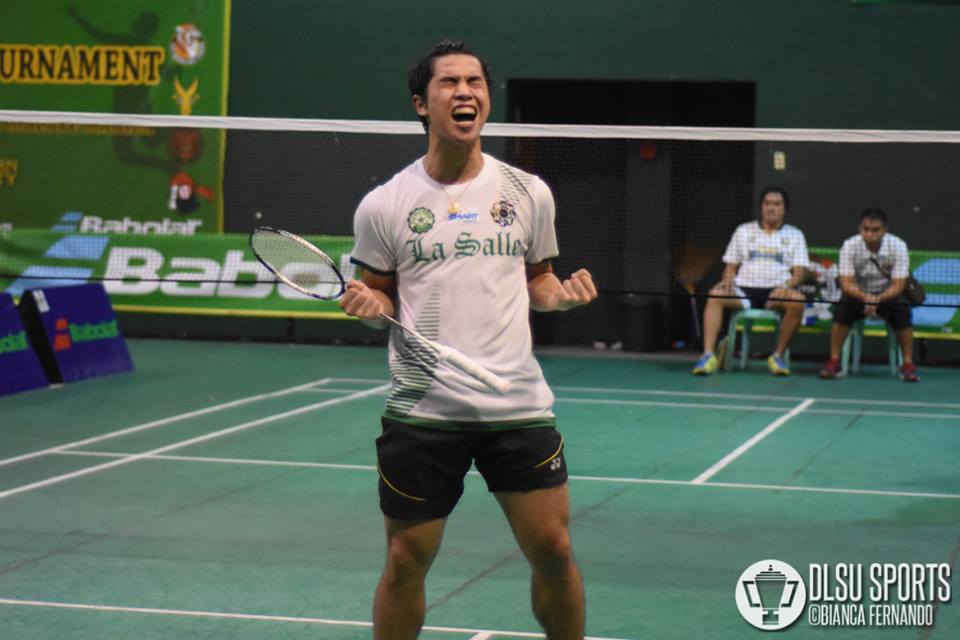 Repeat. The Green Shuttlers once again had a bridesmaid finish in this year’s badminton tournament. DLSU had a strong showing for this Season, but couldn’t overcome the undefeated National University Bulldogs and finished second once again to give DLSU 12 points.

The Lady Shuttlers on the other hand, improved one spot from their fourth place outing last year to gain a podium finish this year. The Lady Shuttlers fought hard during the elimination rounds to garner a twice-to-beat advantage come the Final Four. They however, fell victim to Ateneo’s wrath and ended up losing twice in a row to finish third overall, giving DLSU 10 points. 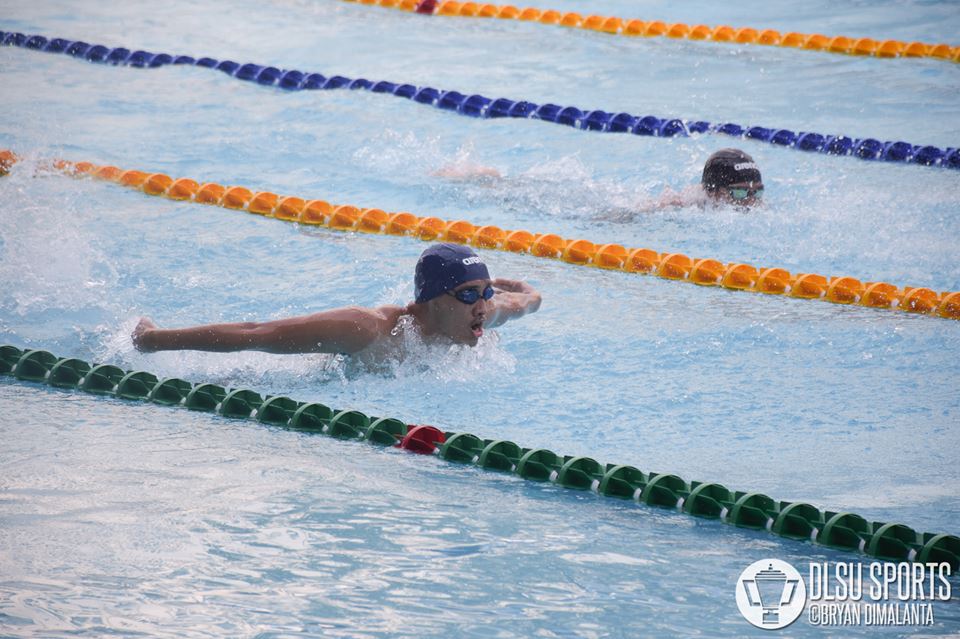 As promised by team captain Vince Raymundo before the start of the Season, the Green and Lady Tankers indeed gave it their all and got the job done. They finished the season at 2nd and 3rd places respectively to give DLSU 12 and 10 points.

In the women’s division, the Lady Spikers finally earned their first ever Beach Volleyball crown. The road they took to get there was not the most ideal, the duo of Kim Fajardo and Cyd Demecillo (third player: Ernestine Tiamzon), dropped the two of their first three games of their season but that did not hamper their spirits as they went on to win their next five games, including a do-or-die game against defending champion University of Santo Tomas. They then beat rivals, Ateneo Lady Eagles in the Final Four, and the Far Eastern University Lady Tamaraws in the Finals to give DLSU 15 General Championship points. Kim Fajardo was named the Tournament’s Most Valuable Player. 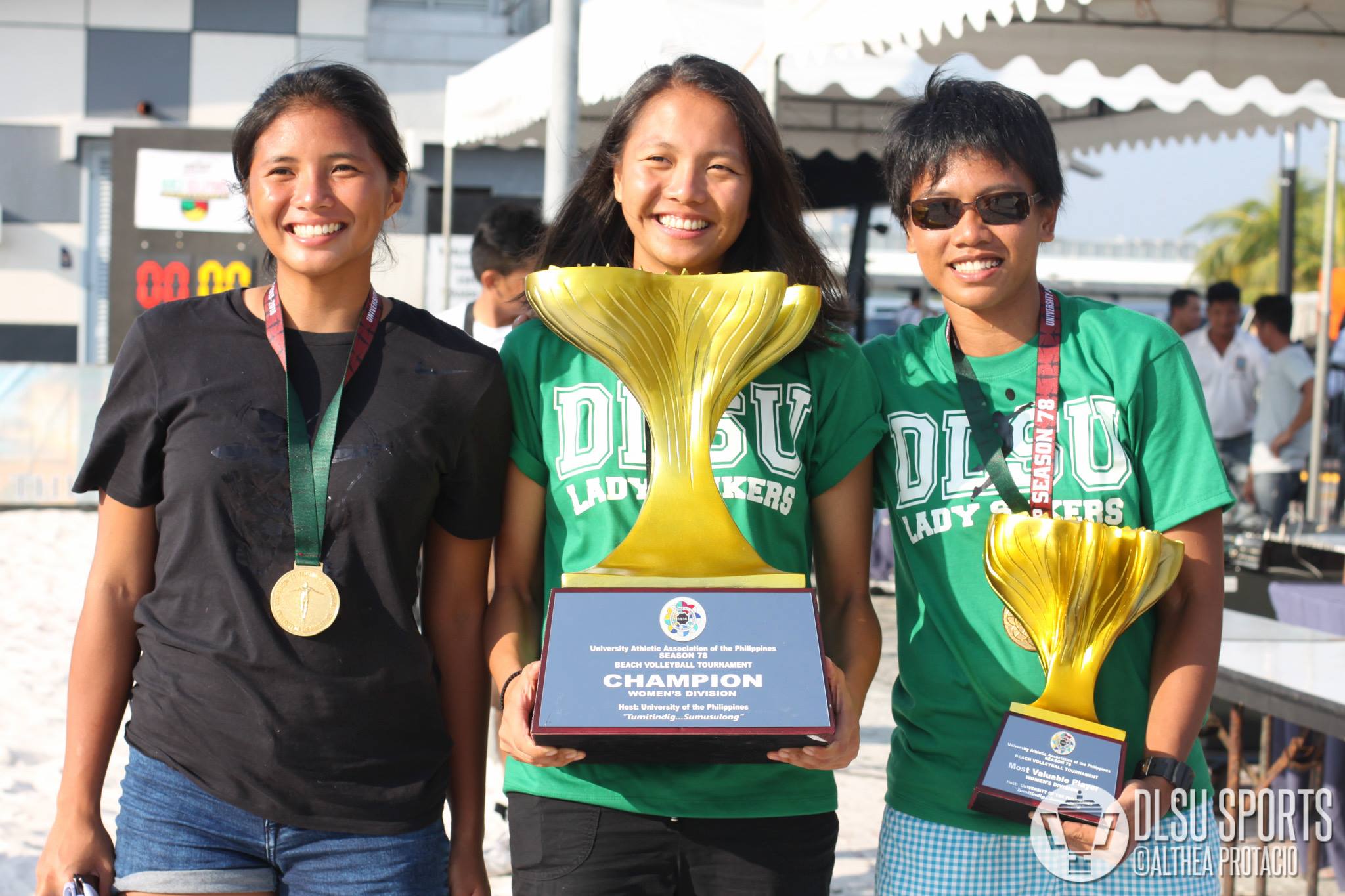 On the other hand, the DLSU Green Spikers had another tough outing as they finished the tournament at 7th place, giving La Salle just two points.

One up. One down. For this Season, the Green and Lady Jins finished the Tournament in third place of their specific divisions, both with 4-2 Win-Loss records. 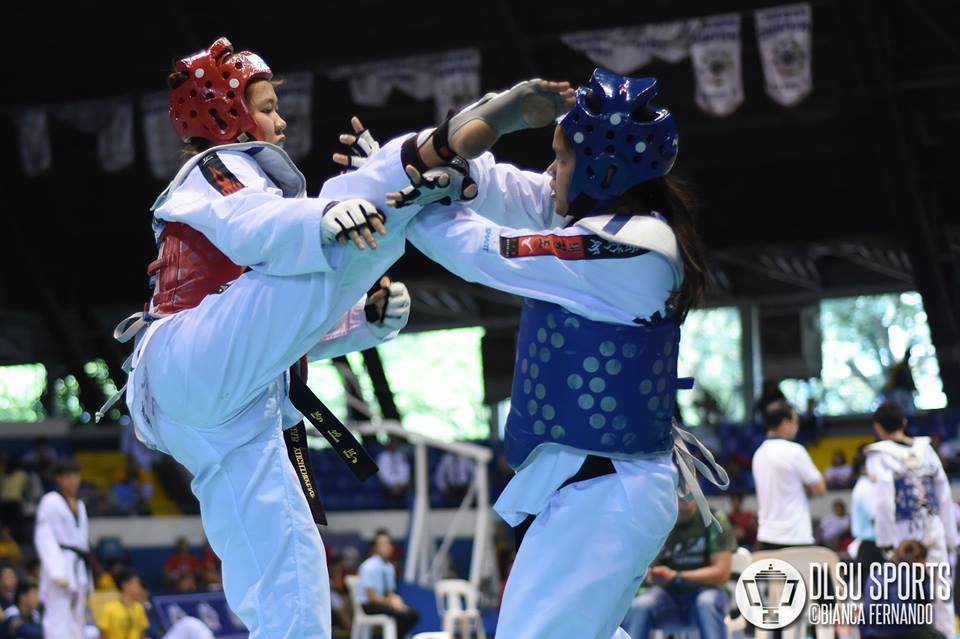 The Green Jins improved one place from last season’s fourth place finish to once again gain a spot on the podium while the Lady Jins dropped from a runner-up finish last year to 3rd place this year.

Bright side for the Green Jins is that they were the only team to hand a loss to the eventual champions, University of Santo Tomas and a bonus Rookie of the Year award for Green Jin Arsenal.

The Poomsae team led by Rinna Babanto and Raphael Mella also finished at third place to give DLSU an additional 10 General Championship points. 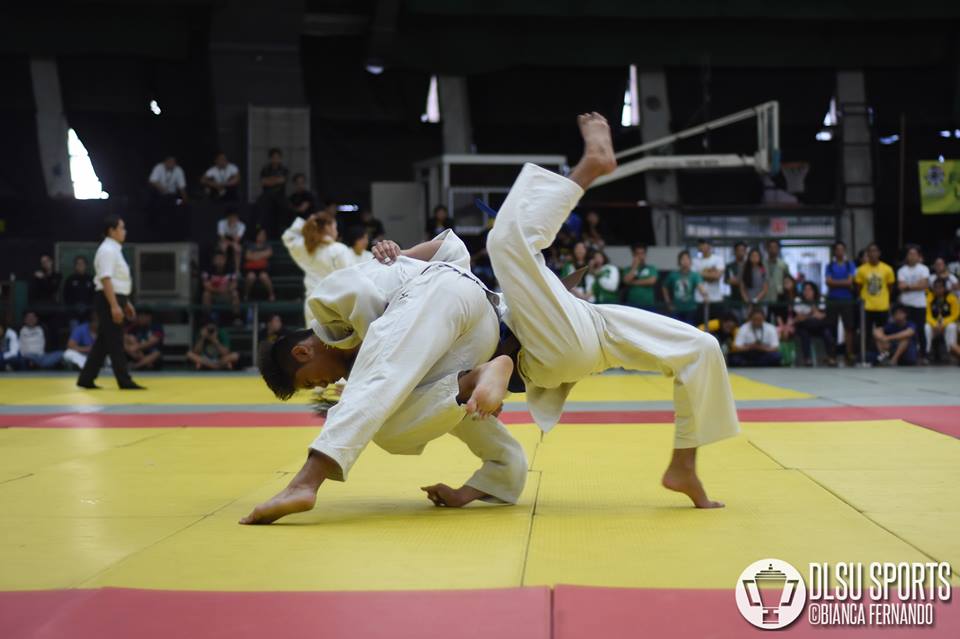 Save the best for last. The Green and Lady Paddlers did not disappoint. For the second straight year, they won the Championships in both divisions.

The Lady Paddlers, led by Most Valuable Player Ian Lariba, finished the Season unscathed. They were undefeated during the elimination rounds to give them a thrice-to-beat advantage in the Finals where they swept Far Eastern University, two games to none to gain their second straight crown. 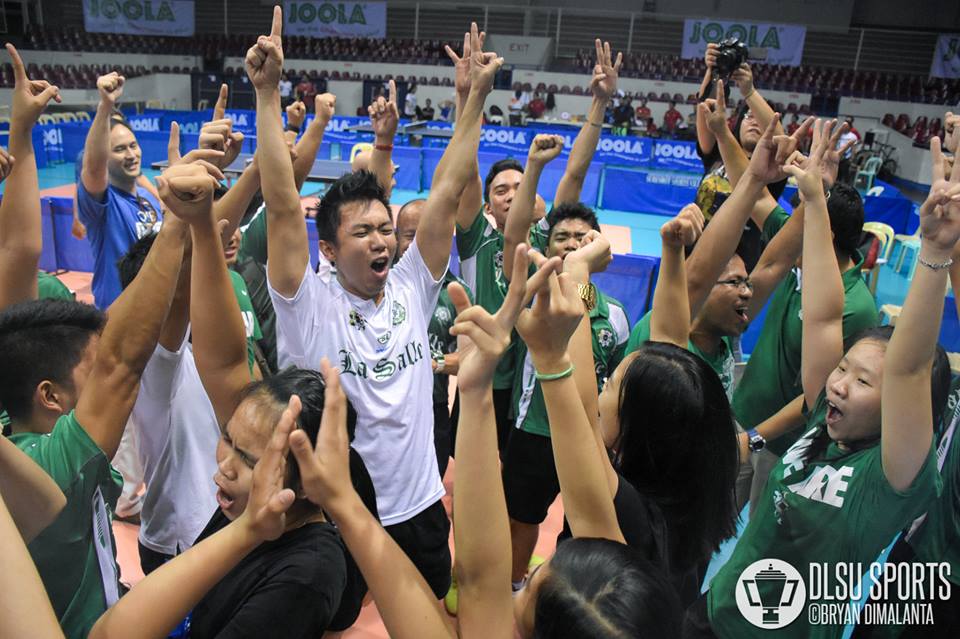 The Green Paddlers on the other hand, had more bumps during the Season. They lost some sets, dropped some games, but what is important is how they bounced back after every obstacle that came their way to come out on top and likewise earn the Championship.

From the double Championships in Table Tennis, DLSU earned the maximum of 15 points per division.

The first semester was filled with ups and downs, Championships and heartbreaking exits, but through it all, the University remained as one La Salle. Now that the second half of the UAAP Season is about to begin, it is time once again to pull back those arrows, aim high, and shoot for that elusive General Championship.